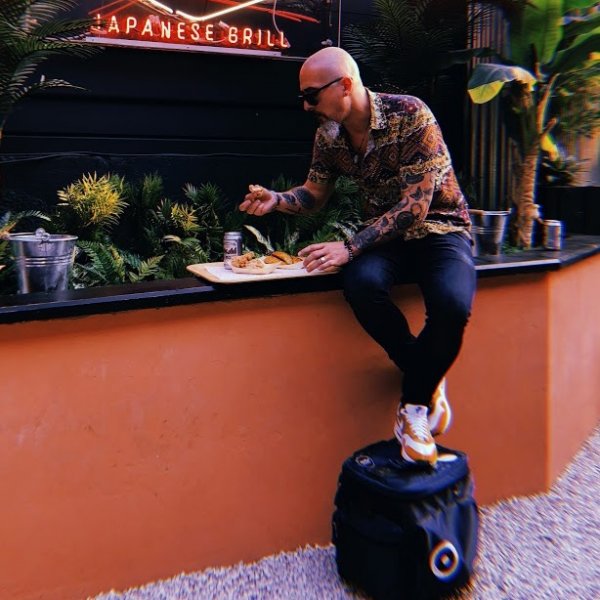 Moodena’s success over the last two years has been nothing short of prodigious. His meteoric rise to the top of both the digital and vinyl charts has all the hallmarks of a classic overnight success story. However, like the majority of such stories he has, in fact, earned his disco stripes the hard way, though years of non-stop effort.

Delving a little deeper reveals that Moodena has, in fact, been working in the electronic
music industry for 25 years. Notably he was co-founder of the hugely influential MN2S. Launched in 1995, initially with their now legendary club nights, MN2S went on to
expand rapidly. They quickly ventured into all aspects of the music industry with their booking agency, record label and distribution company.

Moving forward, 2018 proved to be a landmark year for Moodena. Invited to join Tropical Disco Records by friend Sartorial he quickly took on a variety of roles as partner, in-house producer and resident DJ. His first release for the label, ‘Strawberry Jam’, set the scene for what was to come. Included on ‘Tropical Disco Edit’s Vol. 4: Sound of the Summer’, it hit number one on both deejay.de’s vinyl chart and also the coveted Traxsource Nu Disco chart. DJ support was equally impressive with a long list of legendary selectors including Joey Negro, Danny Krivit, Chez Damier and Soul Clap all supporting. The EP went on to become the label’s biggest selling release of the year.

Despite making his mark initially via the Nu Disco charts, Moodena is so much more than a one-genre producer. He has an extensive background in House music and that forms the building blocks for all of his productions which, much like his DJ sets, combine everything from Disco to Deep and Jazz to Soulful moments.

Since Volume 4 Moodena has been an essential part of Tropical Disco Record’s output, appearing on every 12” to date as well as multiple digital-only releases. Having now
built up an enviable following, Moodena has achieved many more vinyl and digital
number ones as DJ’s and music-lovers alike continue to chase down his releases.
Indeed his sales power is such that 2019 saw him crowned as the number one Nu Disco artist on Traxsource. Moodena has now clocked up seven number one’s in total on that platform alone. His recent release, ‘The Rattlesnake &amp; The Ant’ recorded an extremely rare 25 consecutive days in the number one position.

Stretching his wings, these last 12 months have seen Moodena in strong demand as a
remix artist too. His powerhouse mix of Massiande for Midnight Riot recently hit the
number one spot on Juno Download. With further remixes incoming for Joey Negro’s Z Records, Groove Culture and Glasgow Underground it’s looking to be a busy year ahead
for Moodena. His chart-topping qualities have seen him become hugely sought after by
those seeking to add his flair to some of the biggest artists out there.

Despite such impressive studio prowess Moodena is perhaps most at home in the DJ booth where he brings his extensive musical knowledge and deep love of vinyl to the fore. Hugely adept at moving the dance floor, his residency for Tropical Disco at Number 90 has seen his reputation as a huge talent behind the decks spread quickly. This has led to high profile festival bookings and club tours across Europe & Asia and a South America Tour planned at the end of 2020.