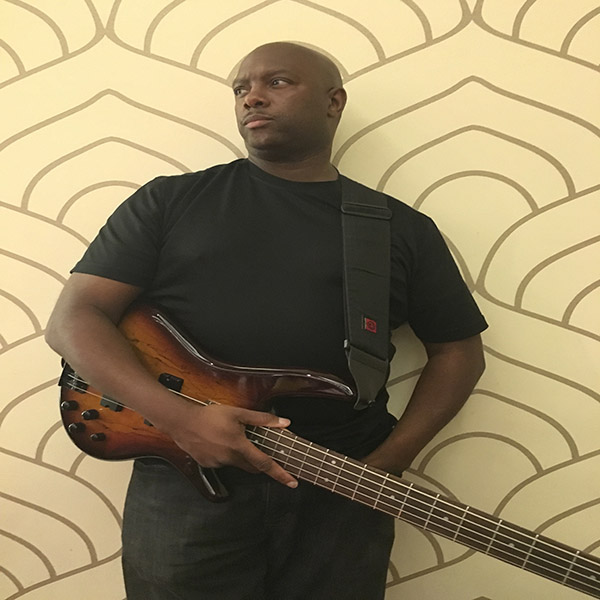 Ricky Nelson is an American musician, singer,song writer and producer, playing multiple instruments. Ricky was introduced to the world of music at a early age by his older brother ( Gordon Nelson. Jr) singer song writer, who held rehearsals for the groups and bands he was in at their home. With instruments always there for Ricky to try out, he took a liking to the drums. One day his brother caught him on the drums and instead of being upset, he made Ricky play and he never looked back.

Ricky's interest in music grew along with him, next picking up a guitar that was left in their basement and never putting it down. Ricky started playing drums and guitar for his school and again finding interest in another instrument playing bass for his band.

Ricky begin working with other writers, artist and producers like Alicia Myers, Joyce Sims, Jeff Redd, Kenny Bobien, Gloria Gaynor and Patrick Adams. While working with Gloria, Ricky, Sidney Barnes and Gloria Gaynor co wrote a song ( Don't You Dare Call It Love )that became Gloria's album single on " The Power Of Love".
While writing and recording Ricky stayed involved with the youth in his home town playing for the schools musical events, during this time, he had the opportunity to meet Khalis Bayyan (Ronald Bell) of Kool and The Gang, who introduced him to his brother Amir Bayyan. Amir begin to guide and help shop Ricky's music to the Legendary Joe Jackson, who took notice of his writing. Shortly after this Ricky joined up with his brother to form 2 groups, the 1st was Time To Play, with 3 Hot singles ( Changing For The Better, Free Your Body, A Love So Much Better ) on Spin City Records, The 2nd was Truce with their 2 Hot singles ( Its Alright on Easy Street Records and Let Me Take You There on Perfect Pair Records )
After leaving Perfect Pair Ricky started working on a solo project that was picked up by Soundman On Wax Records, the 1st single ( Keep On ) took Ricky over seas to Japan and Europe. While he was in Japan the 2nd release hit the airways ( Work It Out ) at the same time, he had a single out on New Generation Records that he wrote and produced.

Next Ricky had the opportunity to work with 1 of R&B's Hottest Male artist JOE and this brought him to the major label scene, getting him sit downs with some of the industries best, Mercury Records, Electra Records, Tommy Boy and Ron Grant of Sony. Ricky then hooked up with another label mate Tyrone Payton from the group INTENSE, the 2 of them together wrote and produced music for the Dance label AceBeat Music releasing over 20 EP's and multiple singles giving AceBeat the sound of Soulful, Inspirational and Gospel House Music. Ricky then stepped into writing and producing for the Gospel group Higher Praise, who he renamed Praise Report. The group went through a transitional period of shaping their sound and image, with this Ricky started adding his eye for video with his music, the group's 1st release ( If You Know ) was featured on B.E.T. and The Word Network Video Gospel, taking him in a new direction, taking his music across TV and the Internet.
Ricky then got the attention of 1 of the worlds strongest Companies, The Salvation Army, he would go on to do several sound tracks for their Educational and Short Films departments, this put him in position to do a Jingle for their holiday fund raiser, giving him radio play over the Clear Channel Communications Inc. When you walk into their New York City locations, you can hear his music greeting you.

Now Ricky along with Tyrone Payton have taken control over their music with their Label TyRick Music dropping 2 CD's 1. Praise Report ( Thank GOD I Made It ) and Ricky's latest project ( IT's My Time ) 3 powerful songs ( It's My Time, All Your Love and Dancing In The Rain ) written and produced by Ricky. All 3 of these songs take you on a ride of uplifting soulful music thats moves your Mind, Body and Soul.