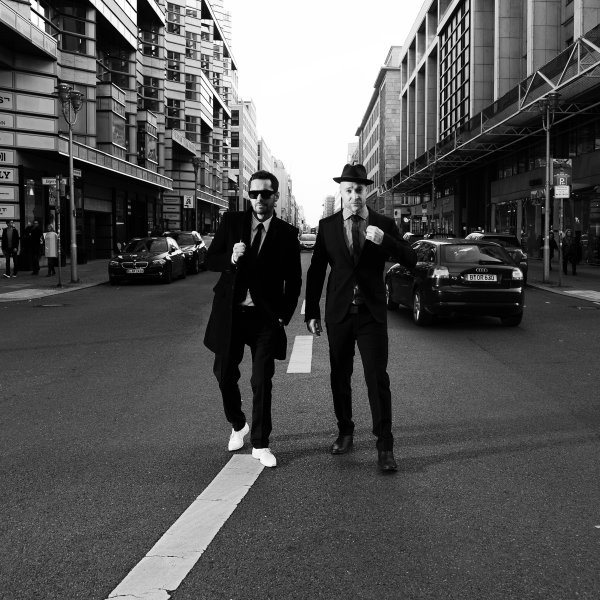 Format:B are Franziskus and Jakob. Jakob is a Berliner, from Kreuzberg to be exact. As all good parents do, his wanted him to play an instrument. After years of successfully dodging music lessons and his parents wishes, he finally at the subtle age of 15 decided that he desperately needed a bass guitar, which then through diligent practice maneuvered him from hardcore bands to funk and jazz bands. But suddenly, there was a small problem: he liked Techno parties much better than rock concerts. So, as one does, he began buying the odd techno maxi here and there until one day little Jakob thought to himself: Why heck, I can do that too! So off he went and bought himself an overpriced Atari St40 and a cheap synthesizer, only to realize that oops those guys from Detroit really do know what they're doing and that it wasn't that easy after all. Well, that is basically where Jacobs ambitiously planned out life suddenly took a screeching of the wheels turn in another direction.

Franziskus is from Erfurt, a small and rural part of Germany's quite rough and wild East, which didn't stop him from starting piano lessons at the innocent age of 6. His musical interests took him from the usual suspects like Michael Jackson and The Pet Shop Boys through to Hardcore (obviously not on the piano). But then one day, or night to be exact similar to Jakob, all was to suddenly change.. A fortuitous night out at the legendary E-Werk in 1993, made this young mans heartbeat skip from Chopin over to a 4/4 beat where it was to remain, probably forever. Three years later Franziskus took up residency at the infamous Sub ground Lighthouse After hour, resulting in numerous further bookings. The paths of these two young men crossed whilst they were both studying to be sound engineers. Seeing as all the other students in there year were long haired Metal heads it was only a matter of time until their paths crossed. So, after spending a few long Berlin party nights together they decided to see if they could start a project together. And so the story ends or better yet, begins with Format:B.

After they were banging numerous hit-singles like "Vivian Wheeler", "Edding 850" and many others, they decided to found there own label Formatik Records in August 2009. In addition to that, they build up a new studio in Berlin Prenzlauer Berg to work on their second Album called "Restless". Meanwhile they catched up a lot of brilliant Techno artists like Sebastien Leger, Hugo and Super Flu to work with. Super Flu were remixing the track "Gospel" - an outstanding Club hit, which finally brought Formatik Records to the ears of the world. As a consequence of their great success, Jakob and Franziskus were "forced" to play live on the whole planet. So they toured to Australia, Asia, USA and discovered their biggest fan-base in South America. In Berlin they found the Watergate Club as the best place to celebrate their own label nights.